Think of your character as a jewel that has about a thousand different facets. If you keep turning them over and exploring new sides, you’ll keep discovering…

I am in love with meeting new people – sometimes it’s when I’m out and about, sometimes it’s in the pages of well-worn books, and sometimes they’re just in my head, waiting to tell me their story.

This is my portfolio of character design work. My absolute passion is bring stories out from me head and into the world – stories I’ve read and stories no one has heard yet. The best part of any story is a well rounded character – someone (or something) that people can really understand or relate to.

I figured as a character designer – I should probably start close to home, so here I am! 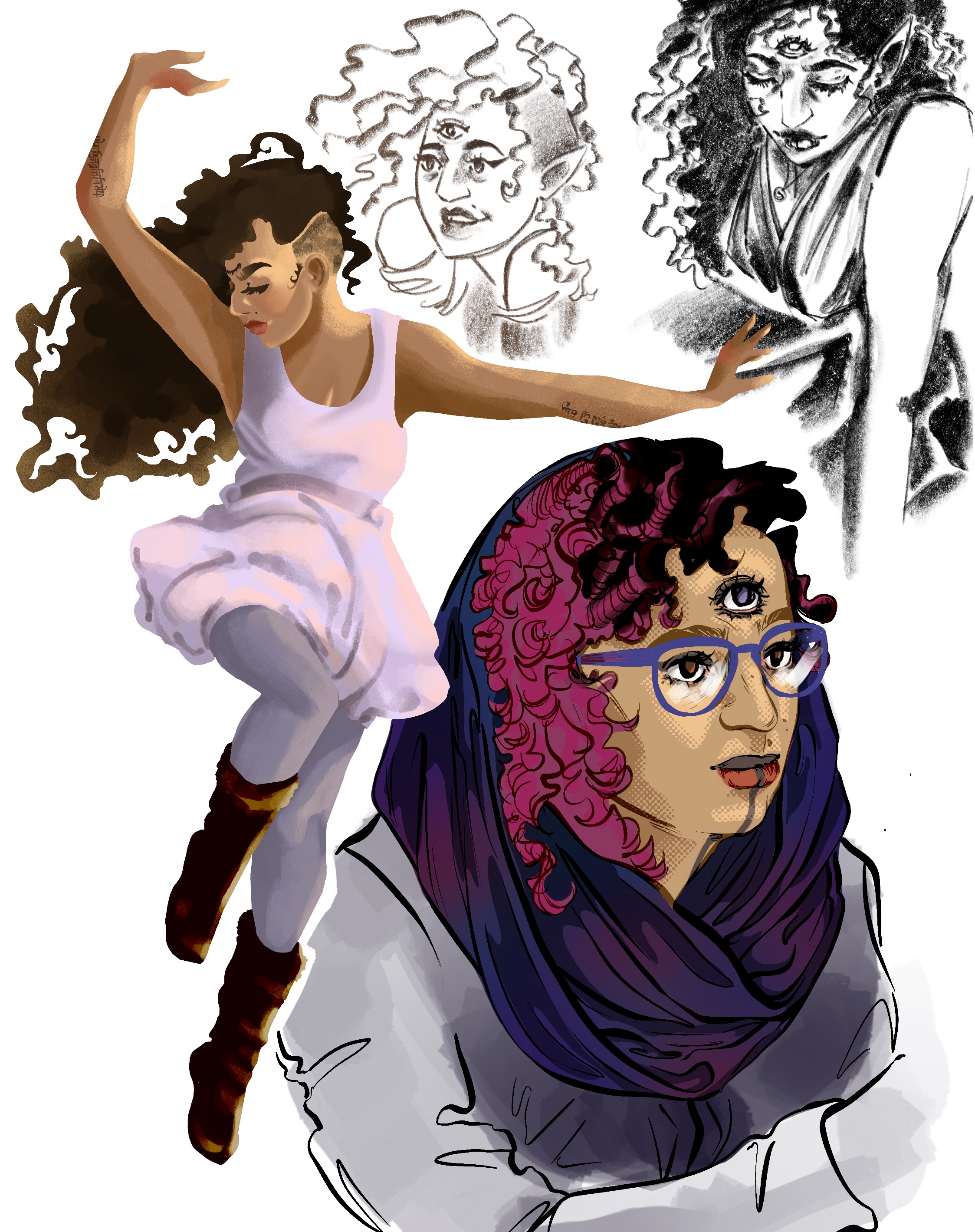 A short film created for the Beltane Fire Society as part of an online celebration of Lughnasadh – a pagan holiday in late Summer. While the feast day of Lughnasadh honors Lugh’s adopted mother, Tailtiu, Lugh is the god who started the holiday, and this animation honors his legend.

“Lugh’s Mastery” is a retelling of one of the myths about Lugh, the god of crafting and skills. He famously approached the magical city of  Tara on a mission to join the court of the king. He had to prove he had skills to contribute, and upon sharing his many skills he was allowed in, extolling the virtues of learning many different crafts to the Tuatha Dé Danann, the people of the city.

Beltane Fire Society approached myself and two others to animate parts of the stories celebrated at Lughnasadh and we decided to neatly divide them and work independently. This enabled us to have complete control over our own stories – making it easier to work remotely, as was required, and also express our own creative vision. To complete this animation I did: 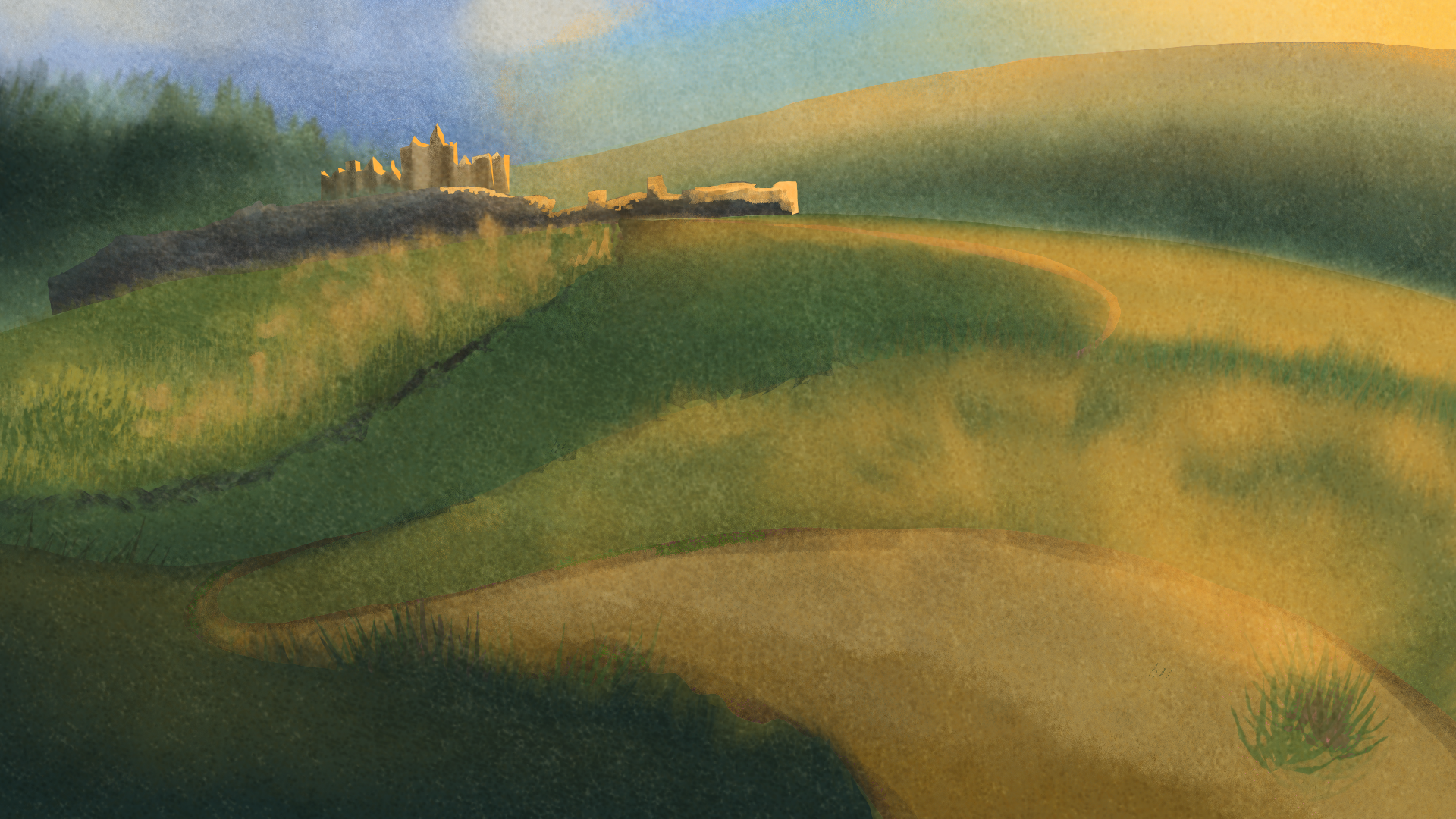 Lugh himself is the god of crafting and skills and this whole myth revolved around him being a “jack of all trades” (maybe one of the first ones ever written about!) He’s always written as self-assured, capable, and quick-witted. His lesson for the people of Tara was that he was valuable because of his many areas of expertise, and that they’d do well to learn more from one another.

The festival of Lughnasadh is ultimately a celebration of his adopted mother, but the element of Lugh that makes it through in practice is that people often teach each other new skills on the feast day!

I did the design for Lugh in collaboration with another animator (who did another chapter of this animation independently) – she submitted her design, and I worked with and from that to create something in a different style. My color and costume research were on my own, as the other animation shows only his face and neck. I did research into travel-clothes in medieval Ireland and Scotland, what colors were associated with Lugh and the gods in general, what runes and adornments might be associated with him, and in general what ‘well made clothes’ looked like then.

Those that reside in Tara have many myths written about specifically them – they’re are sometimes written as gods themselves, demi-gods, magical people, and sometimes just regular people. For the purpose of Lugh’s Mastery – both the abbreviated nature of the medium and the focus of the story being on Lugh himself, I chose to design characters that were regular, well-to-do people.

The major tenet for every design is that each character, with the exception of the small children, have a skill that is their defining characteristic. This is plot relevant! At the beginning of the animation, they work independently, and by the end of the film they are teaching each other.

The Harpist and the Tailor

These two are nearly-neighbors (with a blacksmith in between them). They’re friends, and work together, even before skill-sharing. The Tailor is wearing a fair-isle sweater (despite being potentially anachronistic) to show that she has both the time, skill, and means to create luxureous clothing for herself. The Harpist is a character based on some very interesting research – a straightforward couple of sentences in a city ledger from 700AD about a Black woman who a city official owed a nominal sum of money to for a skill-service rendered. I borrowed from Moorish styling around the same era for her head-wear, although the harp she plays is a fully Irish harp. 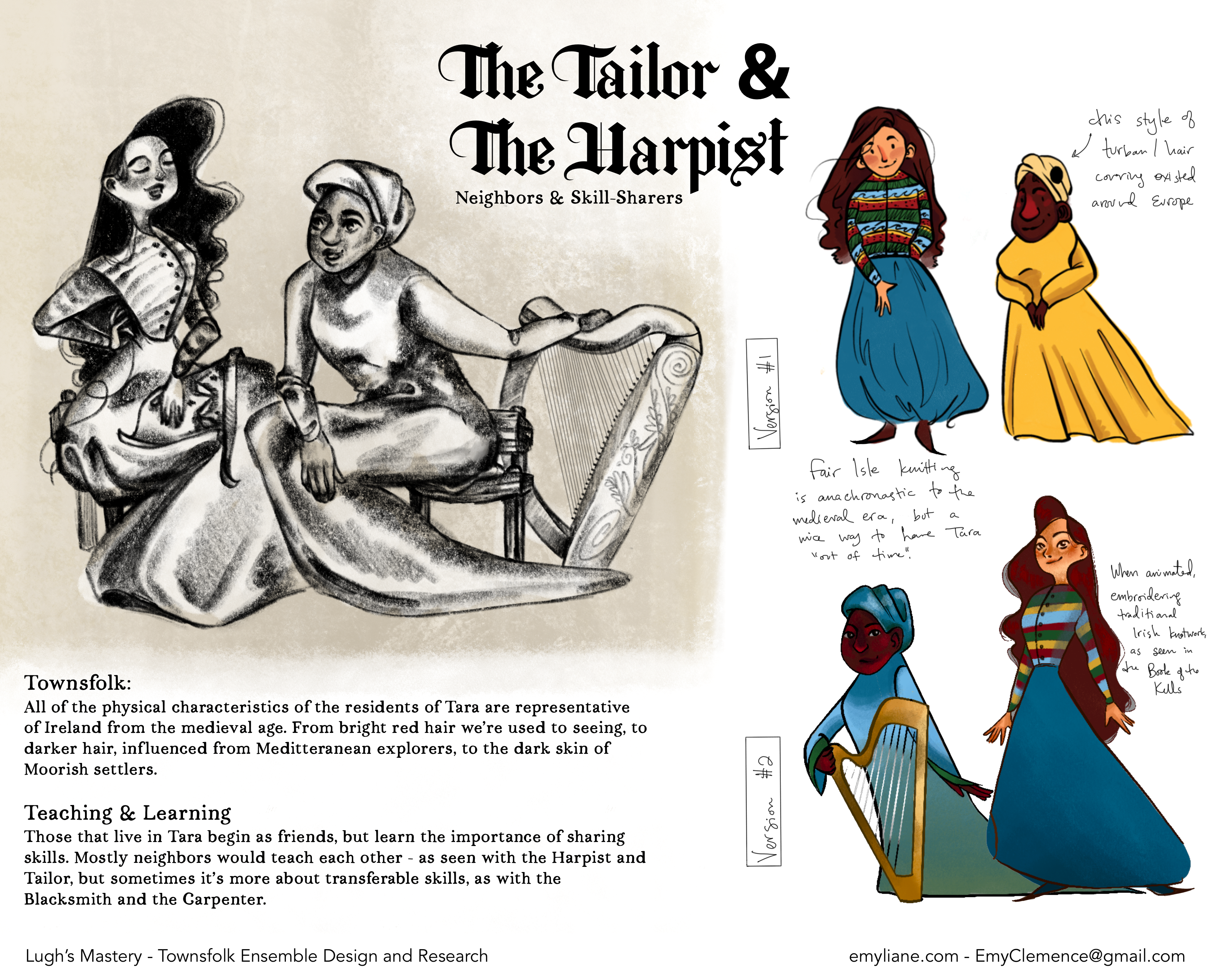 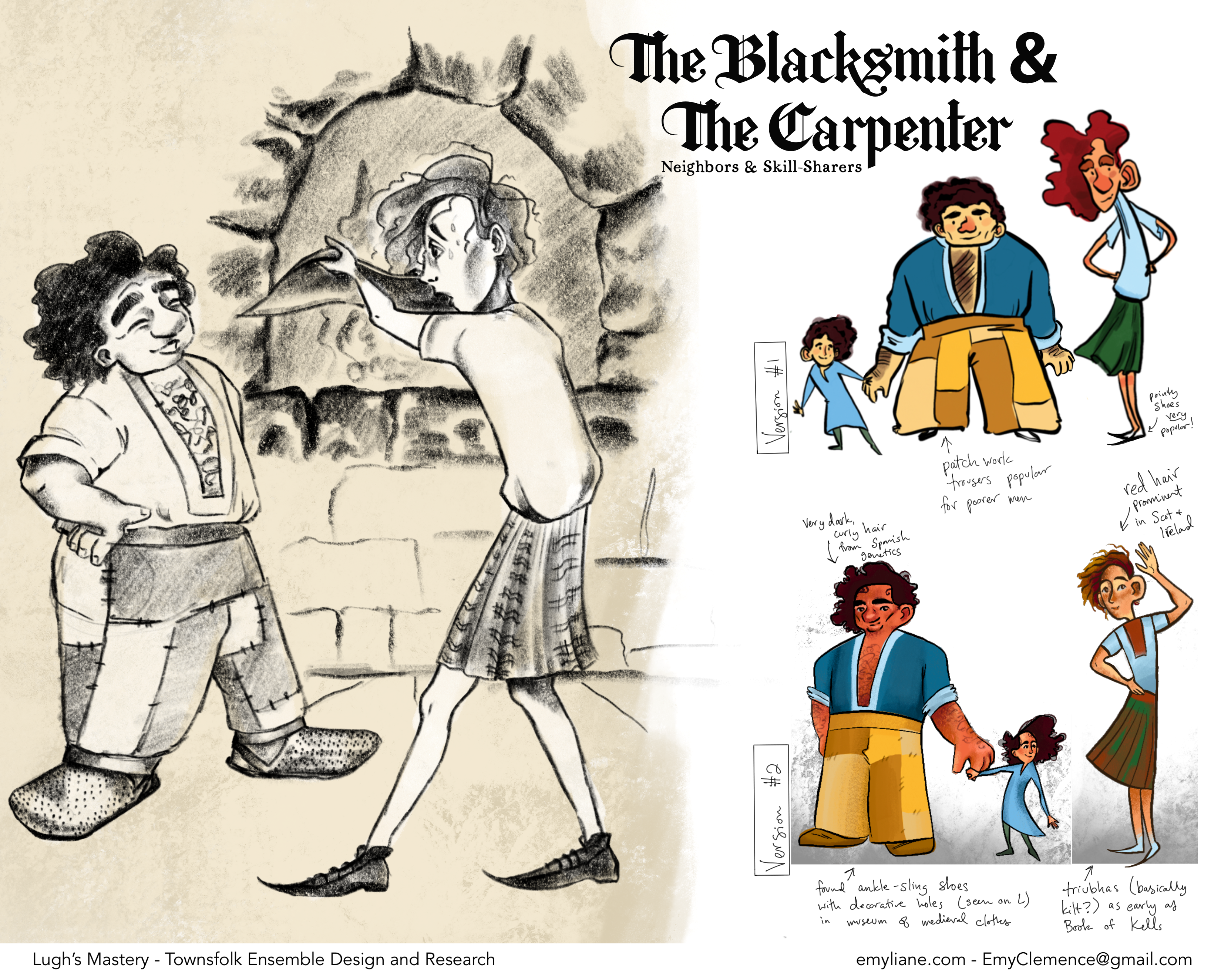 The Blacksmith and the Carpenter

The carpenter is a meticulous worker – lots of measuring before cutting in his world. The blacksmith is all about big, brash moves until nearly the very end, when a delicate hand is required for the first time. Their clothes were based on fun research about what men were wearing in medieval Ireland. The answer surprised me – a garment that looks completely like a kilt is illustrated in the Book of Kells, and some pairs of patchwork trousers have been preserved to the modern era and are currently on display in museum!

The blacksmith has a tiny daughter, but being so young, she’s mostly around to soak in the wonder of others’ skill, and less to learn anything herself, quite yet.

The Historian and The Village Child

History in Ireland, like most of the world around when this story is set, was handed down via oral tradition. The story told in this animation was first told, perhaps, by someone who looks just like this historian here! She’s wearing a simple overcoat, long skirt, and simple shoes – all basic pieces someone of her age and stature would have worn. The little girl she’s telling history to is wearing a simple dress and thick stockings. The pair of them were fun together, the eldest and youngest of the ensemble! 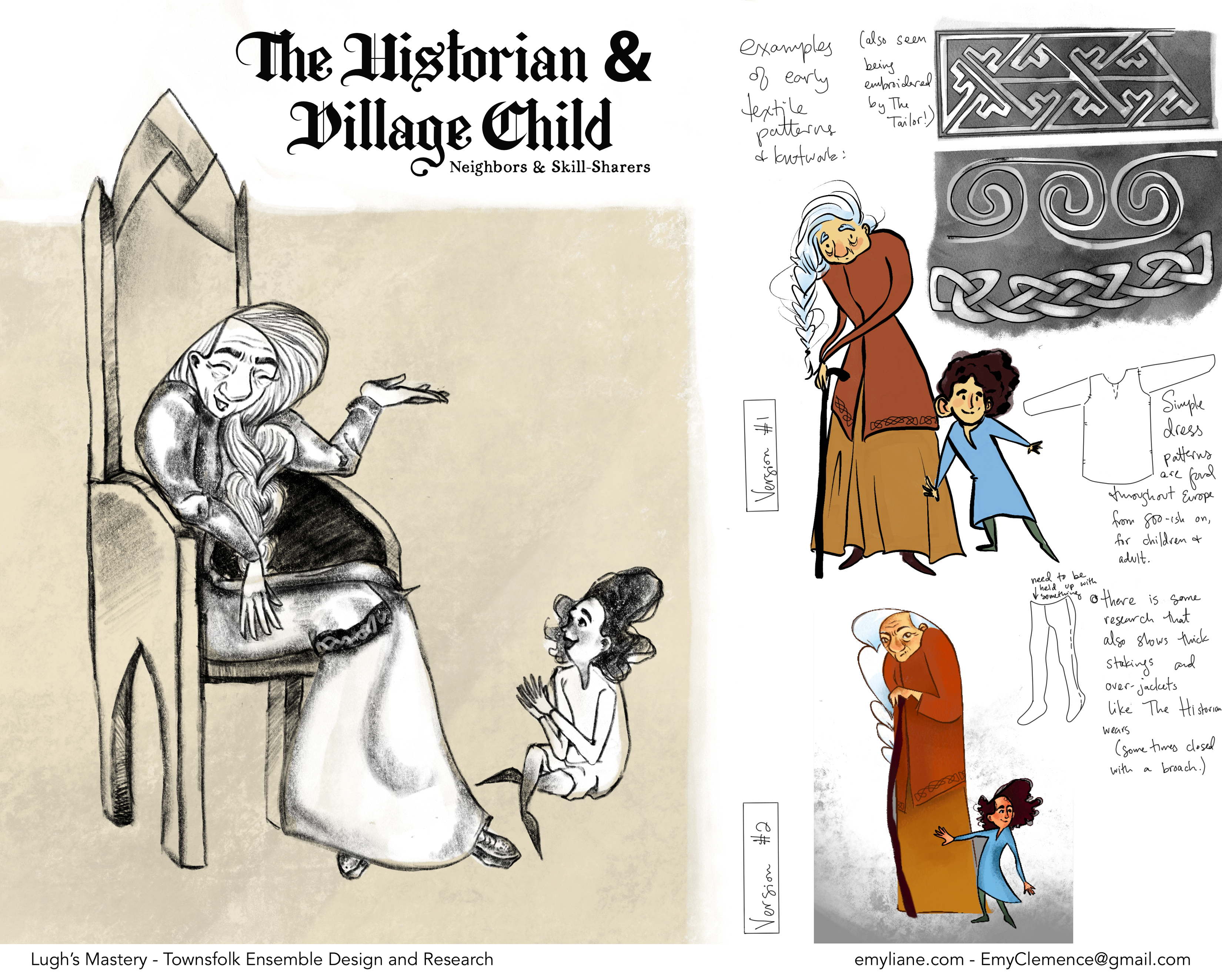 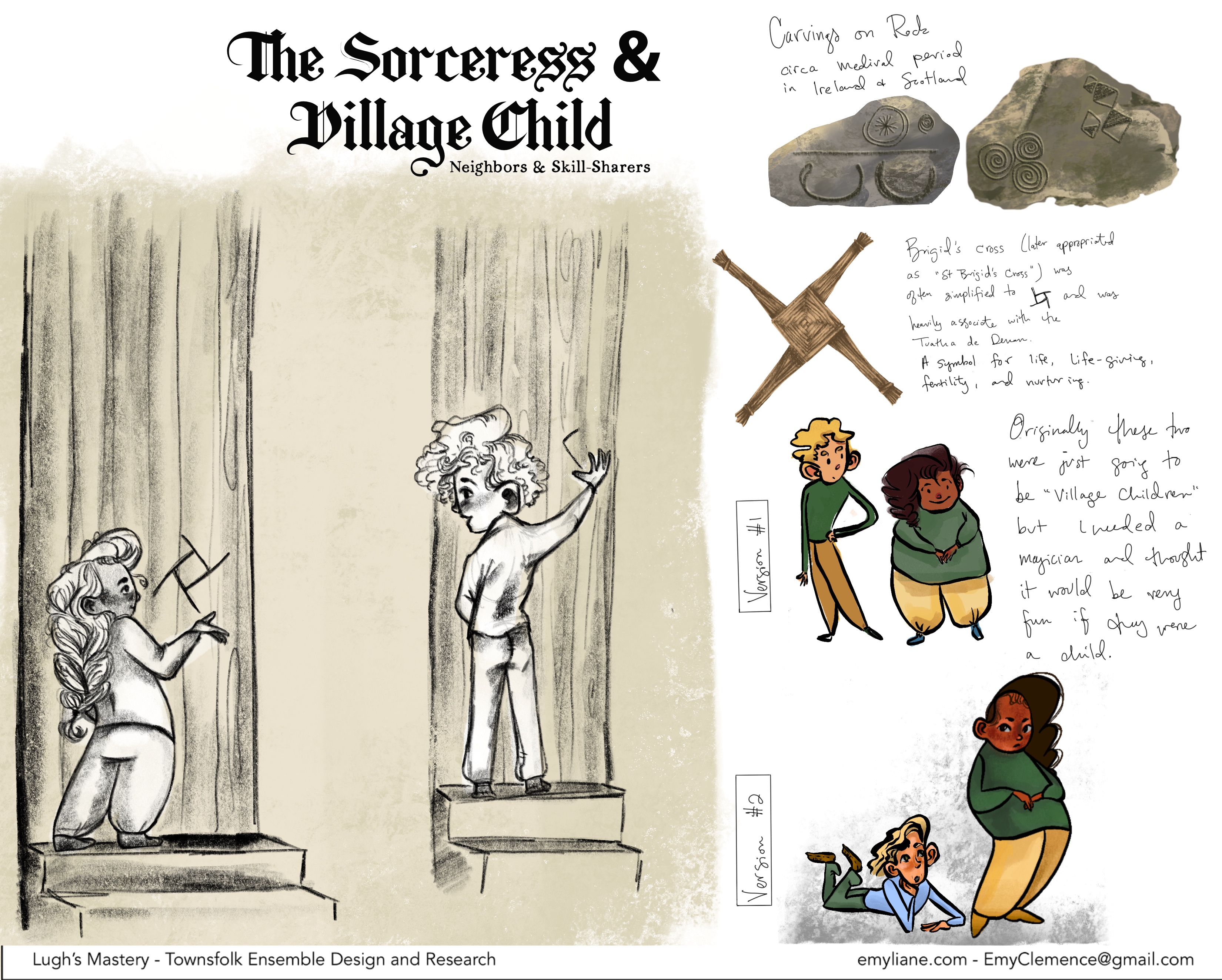 Magic was integral to both Irish society and the Tuatha de Danann. Research into spells and magical runes was a fruitful pursuit, and the concept of who resided over magic knowledge was a mixed bag. The Tuatha de Danann aren’t average Irish people, however, so there was definitely leeway in who was cast in the role.
The sorceress may not be much older than the village child she’s teaching, but she’s very powerful! The mark she’s seen making in the animation is a symbol of new life – while hers will glow and imbibe the home with those intentions, those of her student are simple marks – for now.

The Guards at Tara

A key element to the original myth was that the guards stood between Lugh and his ability to join the court of the king. They are physical and ideological guards for the city of Tara – both a militant presence, and the arbiters of the concept that ‘everyone in the city must provide a skill or trade to the whole’.

My concept for these characters was to go straightforward and with research – finding out what a military guard would actually wear at this time. I knew Lugh needed to stand out as the main character against them, so while I wanted them to have personality, they weren’t meant to be loud or shiny. 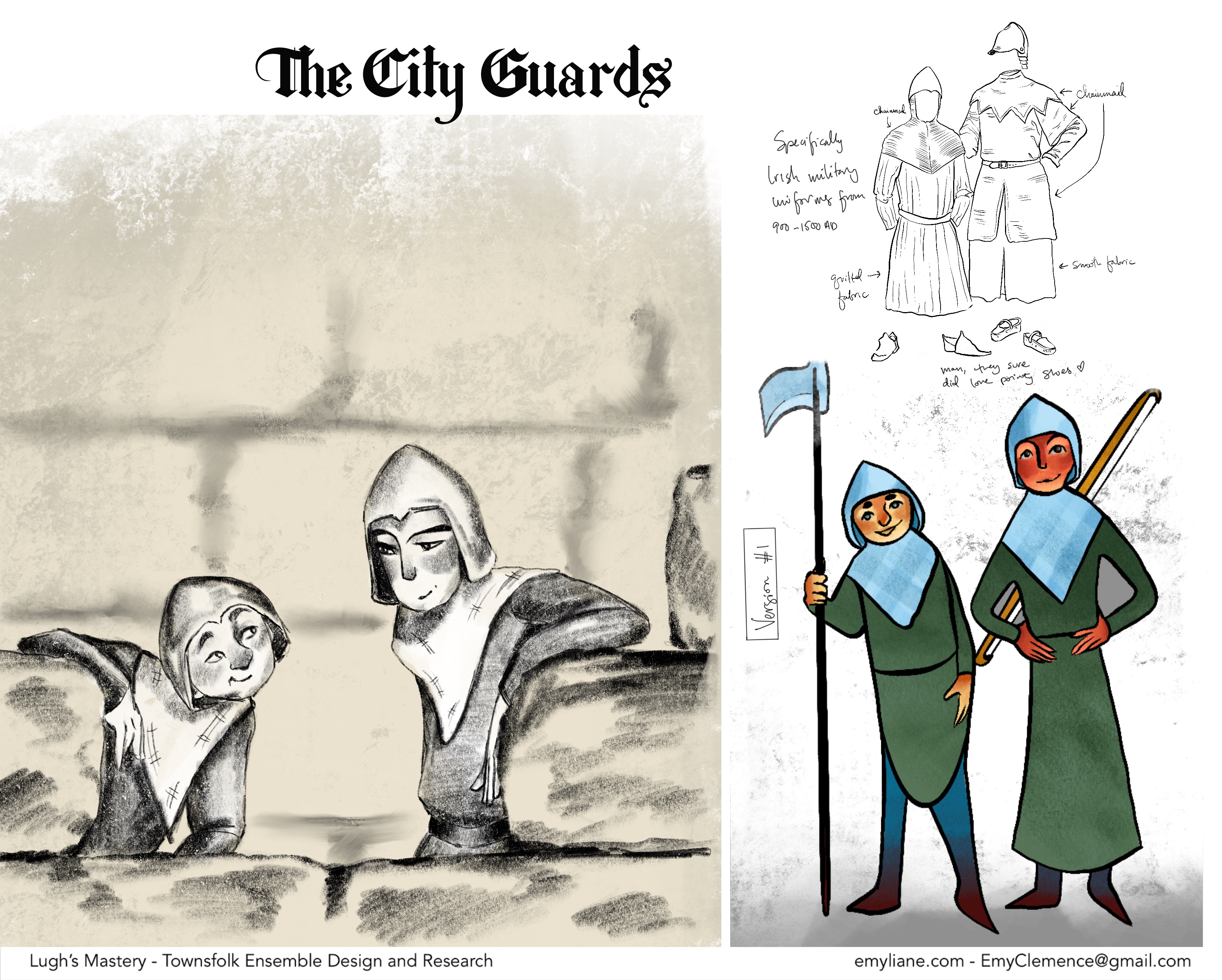 Screencaps from the finished animation:

To see my process for the

rest of the project, check out my

To see the finished short film, watch below:

Under the mentorship of John Mahoney (Disney, Blizzard) I set out to “create a totally new creature.”

• My background in science (BA Scientific Illustration) made this goal especially fun and accessible – I tapped into my understanding of anatomy and physiology, and created something new and fantastic.
• My thought process was: “What two animals definitely don’t go together?” and “What body parts can I add to any existing animal to make them cooler?” This was the result! 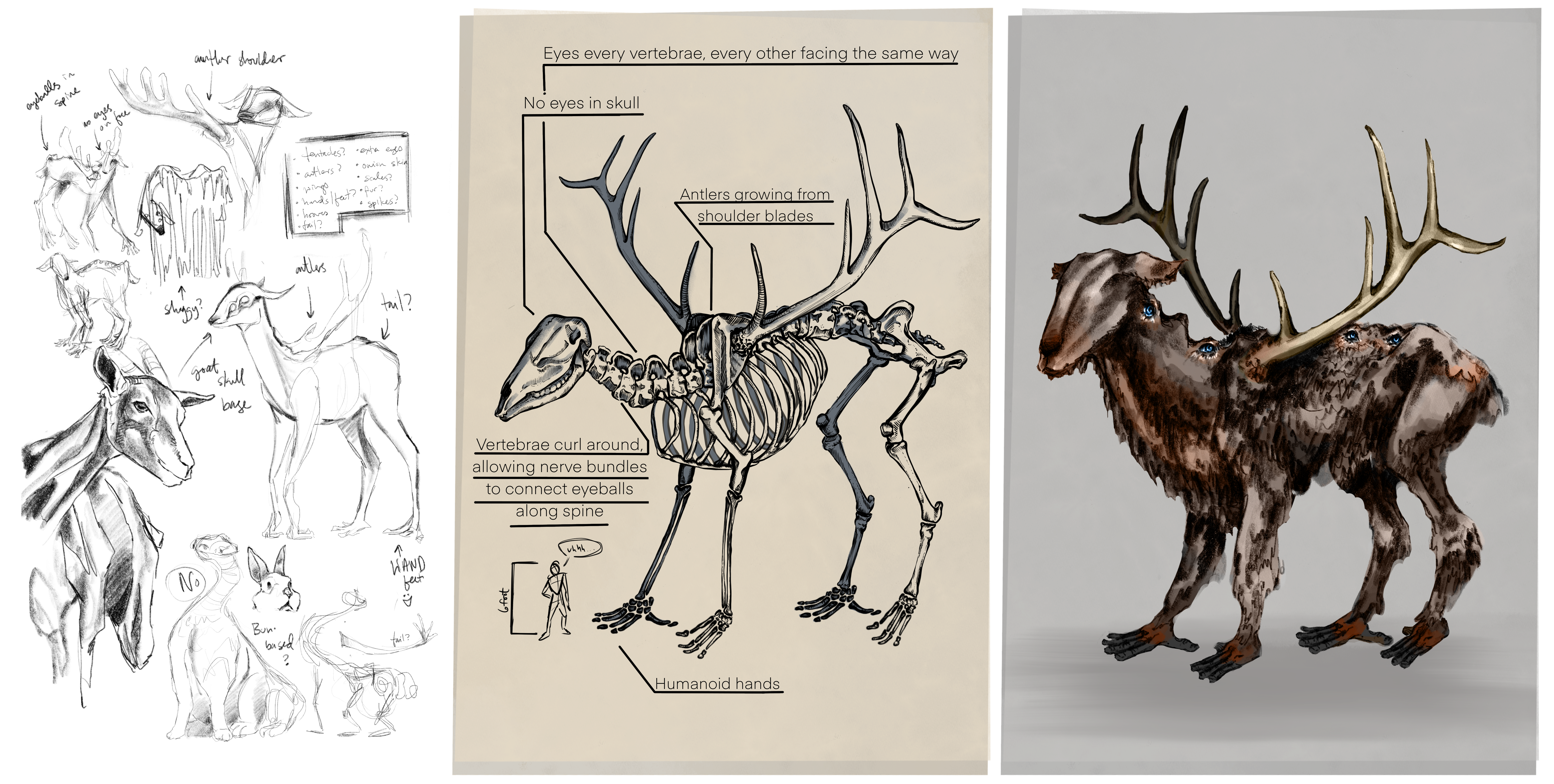 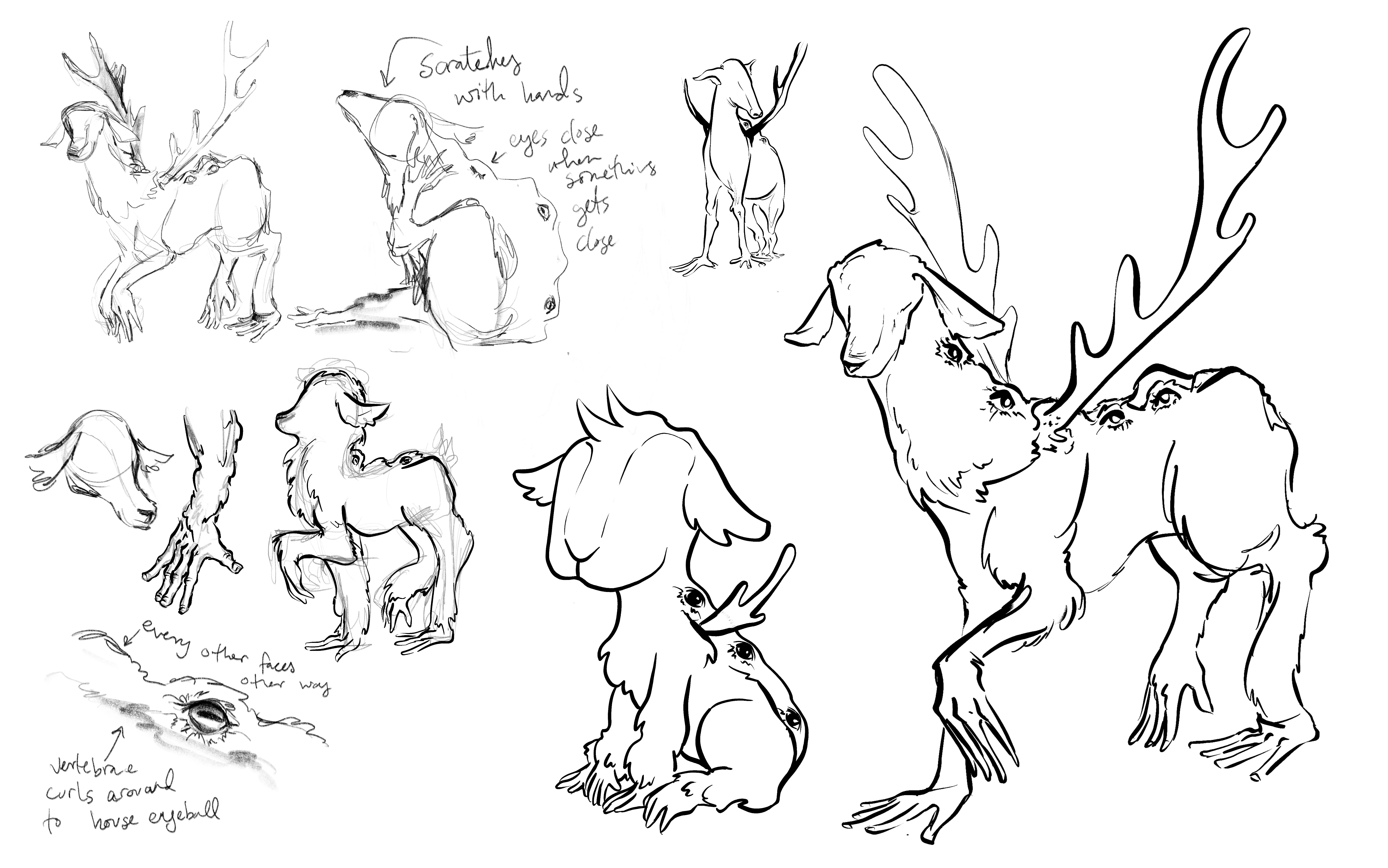 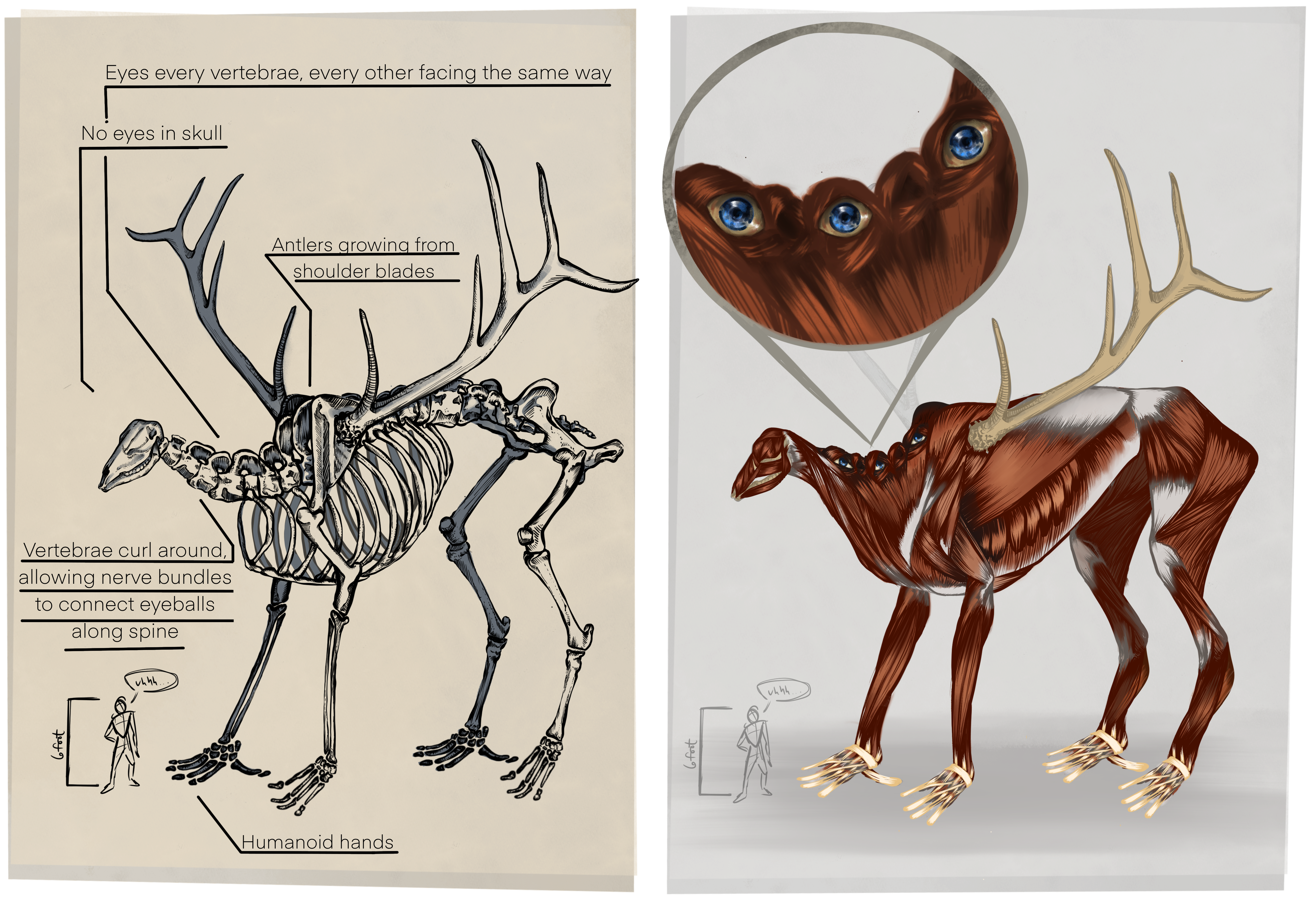 The overall character concept was ‘not too distant’ in the future that things are unrecognizable, but far enough that things are different. I wanted to capitalize on fun and useful technology that’s on the cusp right now, and make it look ‘normal’. Details like: 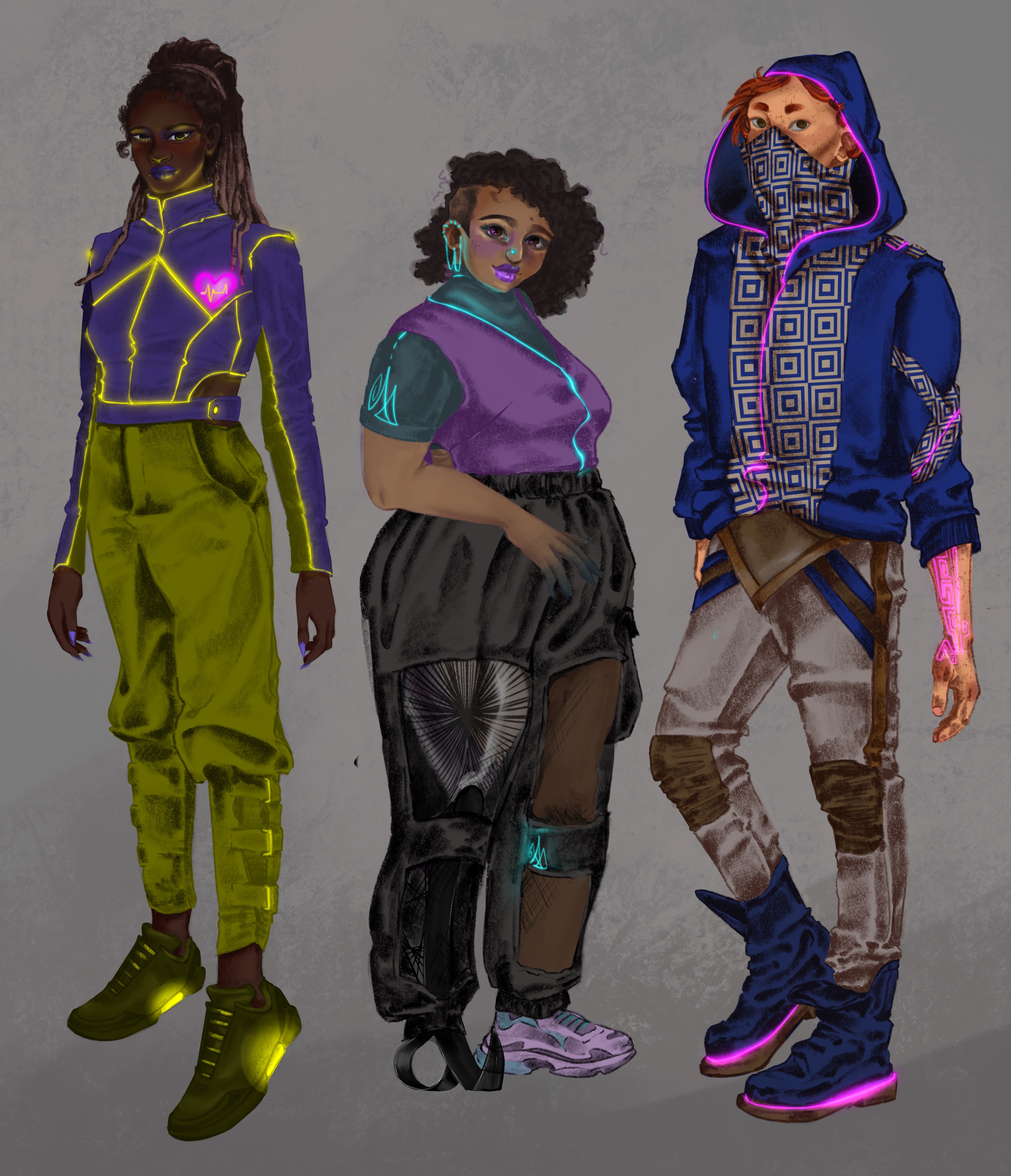 Under the mentorship of John Mahoney (Disney, Blizzard) I set out to design an animal character. Experimentation started loose and exploratory – how ‘animal-like’ vs ‘anthropomorphic’ would be appropriate for this little guy? Once I’d settled on a moth, I needed to figure out how he’d move, and how to root his characterization in his design.

• My background in science (BA Scientific Illustration) made this goal especially fun and accessible – I tapped into my understanding of anatomy and physiology to create something believable and fun!
• My thought process was: “If this moth is a main character, how do they ‘do the most’ in the story? How do they move, how do they telegraph their culture and personality?”

A commission for a TTRPG player – their character with familiar in scene. The prompt was: 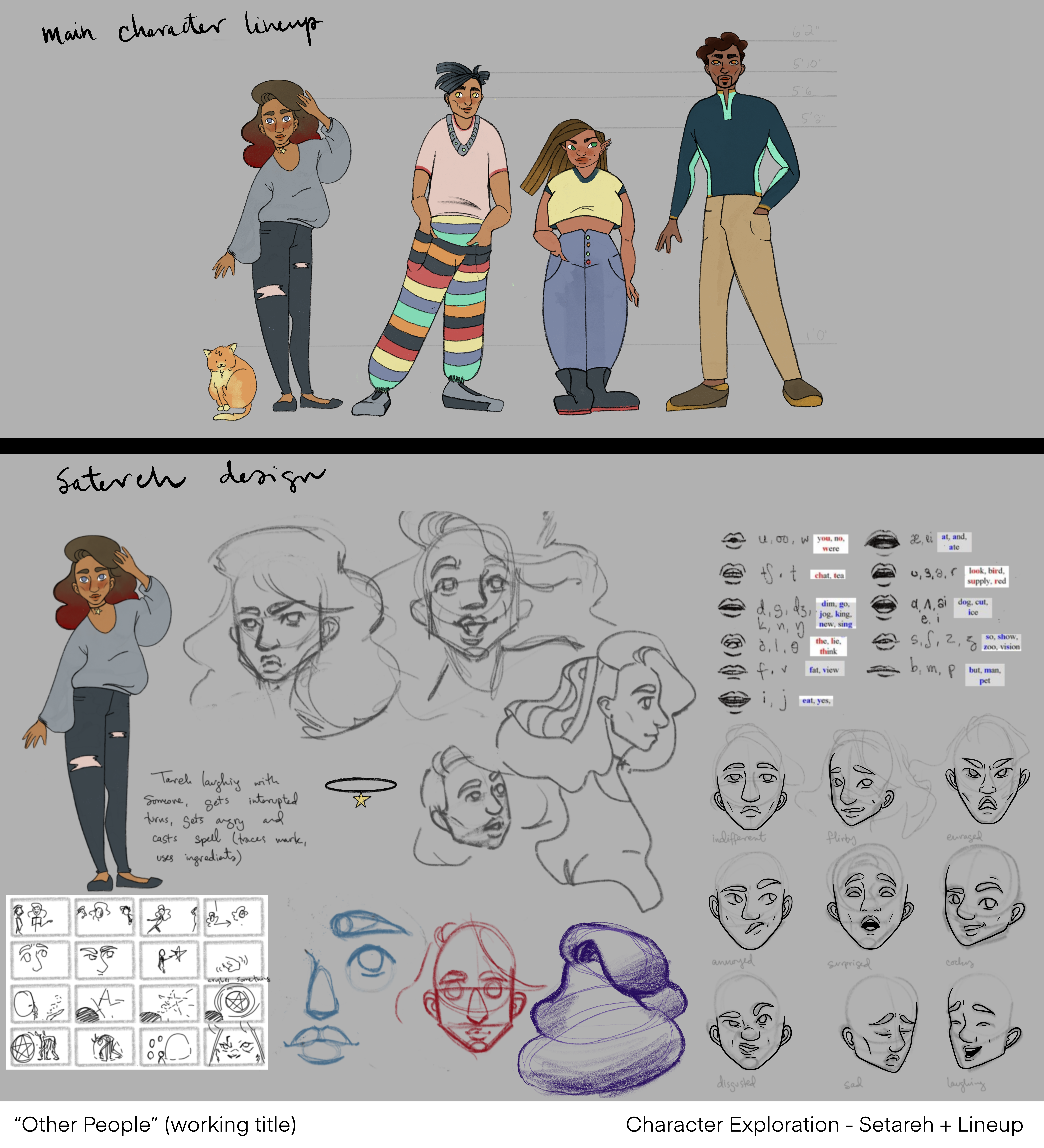 A commission for a pre-production television show in pitch-development phase.

A commission for a short film in pre-production. 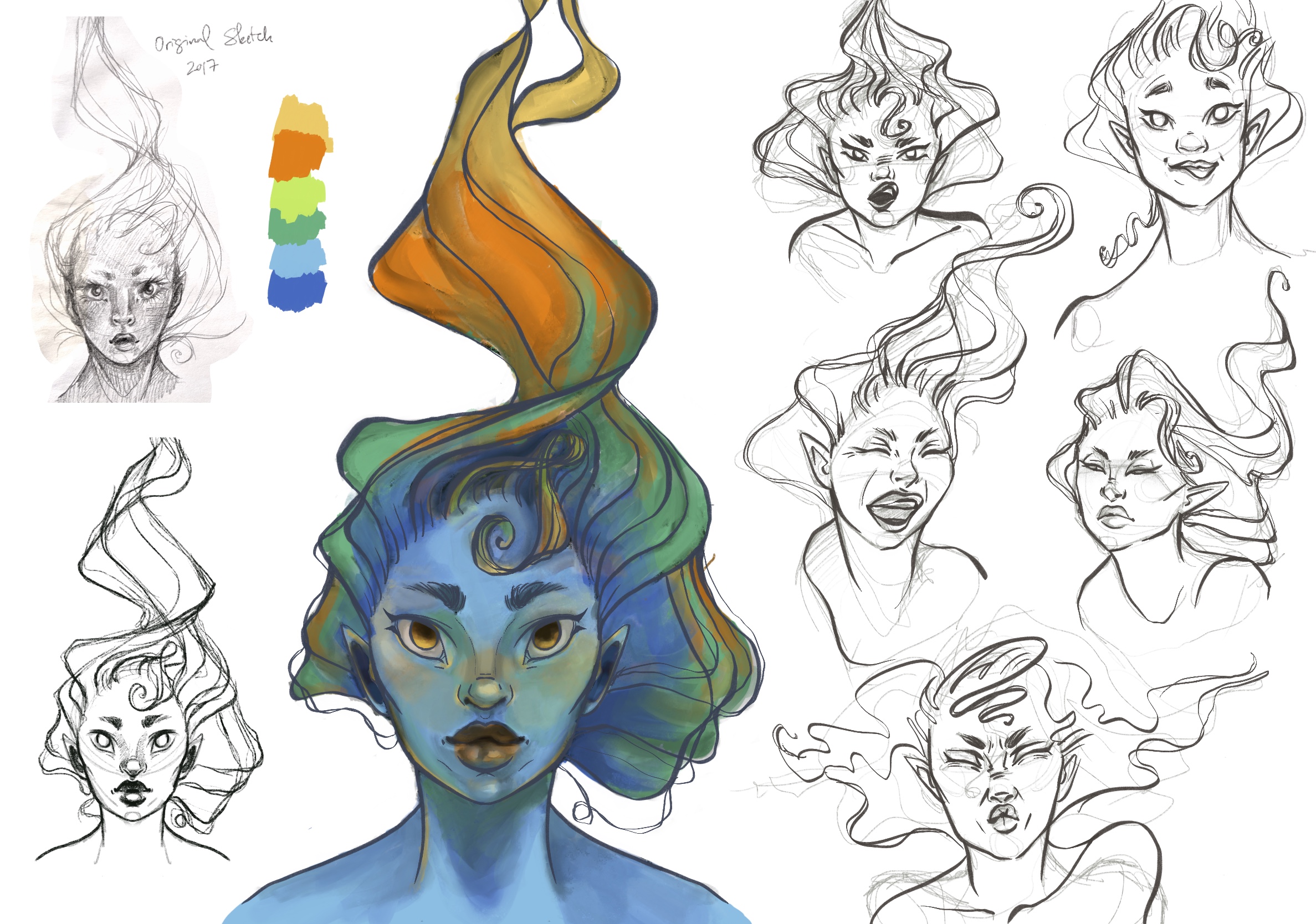 A commission for a TTRPG player – a portrait and loose turnaround of their character.

This was a self directed project to take two of my own characters and redraw them in styles I admire or grew up seeing. It was a great observational challenge to find what makes each of those styles so highly identifiable. Some more obvious than others, each was fun in its own way!

When author Harper A. Brooks reached out to me for concept illustrations, I was thrilled to jump right in. She let me know her ideas, gave me references for appearance, and off I went! A few of these pieces even let me stretch my design muscles, as some characters are intentionally described less to give the reader more opportunity to imagine. Over the past few months, I’ve completed 8 pieces for Harper. I used Procreate and Photoshop for these illustrations.

My roles throughout these concept pieces: